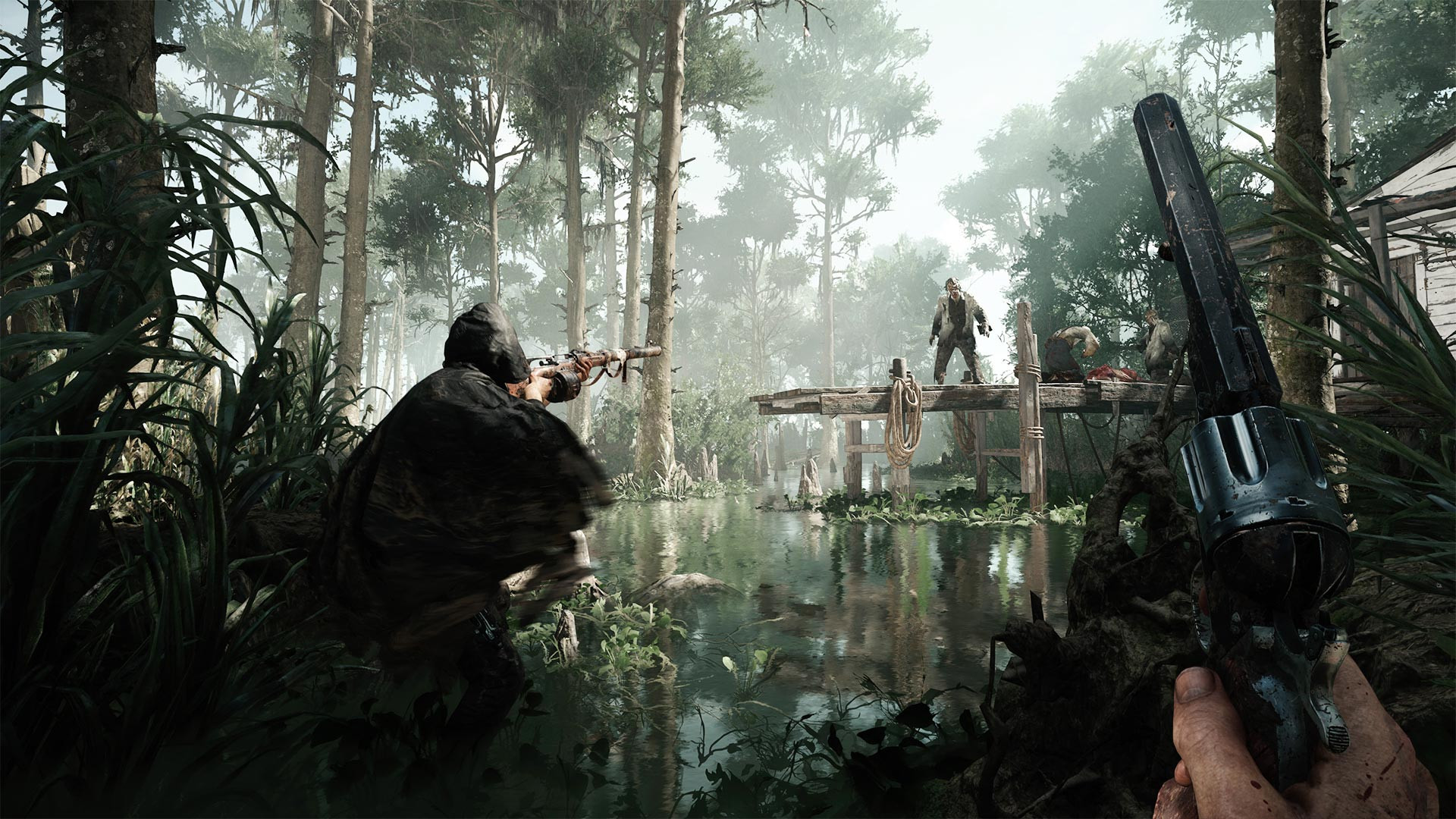 Savage, nightmarish monsters roam the Louisiana swamps, and you are part of a group of rugged bounty hunters bound to rid the world of their ghastly presence. Banish these creatures from our world, and you will be paid generously—and given the chance to buy more gruesome and powerful weapons. Fail, and death will strip you of both character and gear. Your experience, however, remains in your pool of hunters—called your Bloodline—always.

Hunt’s competitive, match-based gameplay mixes PvP and PvE elements to create a uniquely tense experience where your life, your character, and your gear are always on the line. At the beginning of each Bounty Hunt match, up to 12 players set out to track their monstrous targets. Depending on which mode and team options you’ve chosen, that 12 will include a combination of solo players and teams of two or three. Once they’ve found and defeated one of these they will receive a bounty—and instantly become a target for every other Hunter left on the map. If you don’t watch your back, you’ll find a knife in it, and your last memory will be of someone else walking away with your prize. The higher the risk, the higher the reward–but a single mistake could cost you everything.

Hunt's Quick Play game mode offers a shorter match, during which up to ten individual players race to scavenge gear and find and close four rifts as they compete for a diminishing pool of bounty. First Hunter to the final rift absorbs its energy, but must survive the final count down to complete the mission—while the other Hunters attempt to take them out and take the prize for themselves. When the timer runs out the winner keeps their Hunter, while the rest perish.

Even in death, you will be able to progress among the ranks of Hunters via your Bloodline. Though one character may die, their experience will be transferred to your Bloodline, where it can be applied your other Hunters. If you make it off of the map alive, you will be able to use the money and experience you earn to kit out new Hunters and prepare for the next match. If you die, you lose everything but your experience.

Dark Sight allows Hunters to see into the veil between worlds, making that which cannot be seen by mortal eyes visible to those who have been initiated. Use Dark Sight when you are tracking monsters, and a ghostly light will guide you toward your next target. Dark Sight also marks players carrying a bounty, making them more vulnerable to ambush while trying to escape.

$71.99
Tax included. Discount code will be applied or can be added at checkout.

The Double Pack of Hunt: Showdown includes TWO STEAM KEYS, so you can get yourself and a friend in on the bounty hunting action!

Hunt: Showdown is a competitive first-person PvP bounty hunting game with heavy PvE elements, from the makers of Crysis. Set in the darkest corners of the world, it packs the thrill of survival games into a match-based format.